SHOOTS:  A total of  7 shoots will be held April through October.  Each shoot will consist of 25 16-yard targets and 25 handicap targets.

H.O.A.: Individual High Over All will be awarded in each of four classes.  The Team with the highest combined scores will also receive an award.

TEAMS:   A team will consist of not more than seven shooters.  The five highest scores each month will make up the team total.

MULLIGAN:  Shooters are eligible to pay an additional $5 to shoot ONE more round in an attempt to better their score each month.  You must declare your intentions prior to shooting the additional round.  The higher score of the two rounds will be entered into the record for your monthly score.  Please note, you cannot do over both singles and handicap, only one per month.  Siince handicap depends on your score from the sixteen yard line, you must decide if you want to mulligan the 16 yd line score prior to shooting your handicap.

FLIGHTS:  If we have ten or more teams, we will establish a flight system. The teams will be broken down into a flight depending on team averages from the first two shoots.  Those teams will compete for first place in each flight.  An award will be presented to each member of the winning team in each flight at the end of our season.

SHOOT AHEADS:  We have expanded the League shoot dates to two days per month.  Please try to shoot on the league dates as scheduled.  If this is not possible, please make every effort to shoot PRIOR TO league date. ANY SHOOTS MISSED MUST MAKE UP NO LATER THAN THE FOLLOWING MONTH.  Shoot Aheads ARE eligible to participate in the Lewis Class this year, make ups after scheduled months shoot are not.

SUBSTITUTIONS:  The team captain may substitute, in the case of an emergency, one shooter for the remainder of the shooting season.  Only one substitution is allowed per team per year. Captains may add members up to seven throughout the year but only replace a member one time.

COST:  Shooters MUST be on a sponsored team.  We can assist in placing a shooter on a team if necessary.  Monthly shoots are $15.00. If shooter chooses to do a Mulligan, it is an additional $5.00. To play the Lewis (Pays three classes 60/40% – 6 different scores win each month), it is $5.00.  Shooters are responsible for their own ammunition and firearm.  Eye and ear protection is recommended.

SPONSORS:  Any business, group, or organization may sponsor a team.  Cost to each sponsor is $60.00 per team.

SIGN-UP SHEET:  Please fill out sign-up sheet complete with name and address of all team members.  Include your email address if you would like a copy of the league newsletter which includes scores, team rankings, etc. as they will NOT be mailed.  Pre-registration form should be returned to the above address with sponsor fee.  Although pre-registration is appreciated, it is not mandatory.  Teams can sign up the day of the first shoot. 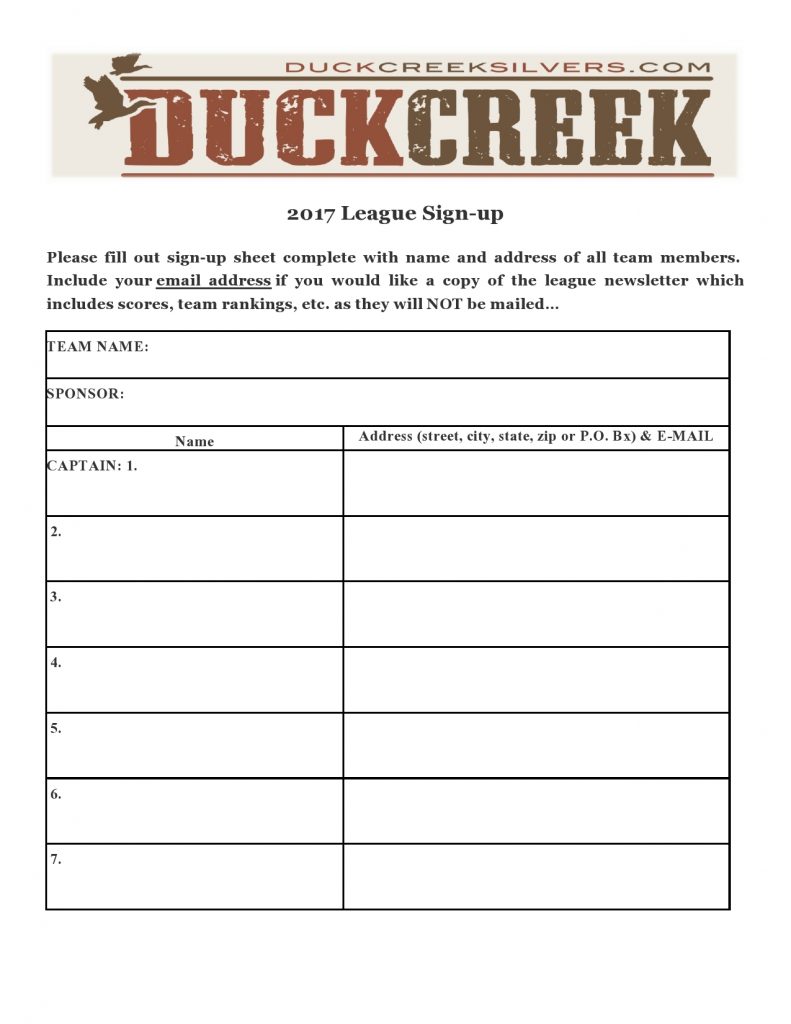